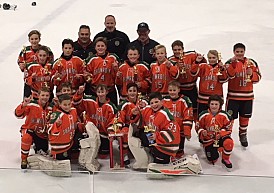 Over Veterans Day weekend, the 06 Pee Wee Minor Orange team traveled to Hooksett, NH to play in the 2017 Elite Prospects Showdown Championship. They played against top EHF, Premiere, and BHL teams. They finished the Round Robin as the #2 Seed. They played the Manchester Monarchs in the semi's and won 2-0 with goals from Larry Cullity and Evan Rocha. Liam Brooks assisted on both goals. The Shamrocks got great goaltending from both Braydon Holt and Tyler Riche. The 06 Shamrocks played the North Suburban Wings in the Championship game. Tyler Muse paced the offense with 2 goals. Larry Cullity scored a power play goal and Atticus Beasley capped off the scoring with an empty net goal! The defensive corp of Colin Lawson, Brooks, Nick D'Amico, Josh Henry, Michael DeRose, and Chase Caron were outstanding all tournament. Every forward scored at least 1 goal in the tournament. The parents, players, and coaches all represented the Shamrock organization with tremendous class and sportsmanship!