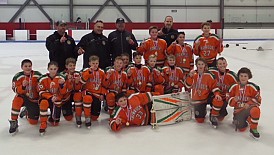 The 06 Orange NS Shamrocks went 3 - 0 in the Round Robin in the 2018 MLK Classic Tournament in Hudson, NH over MLK weekend to finish as the #1 seed in the Playoffs on Monday. They beat teams from EHF, BHL. and an Elite team from the AYHL.

The offense during the tournament was led by Brian Banks and Tyler Muse who both had 5 Goals and 5 Assists. Larry Cullity had 5 Goals and 3 assists, and Nolan Lopes had 3 goals and 1 assist.

Goaltender, Brayden Holt was tremendous all tournament and gave up only 4 goals in the tournament.